The Power of the Seed Mantra OM! 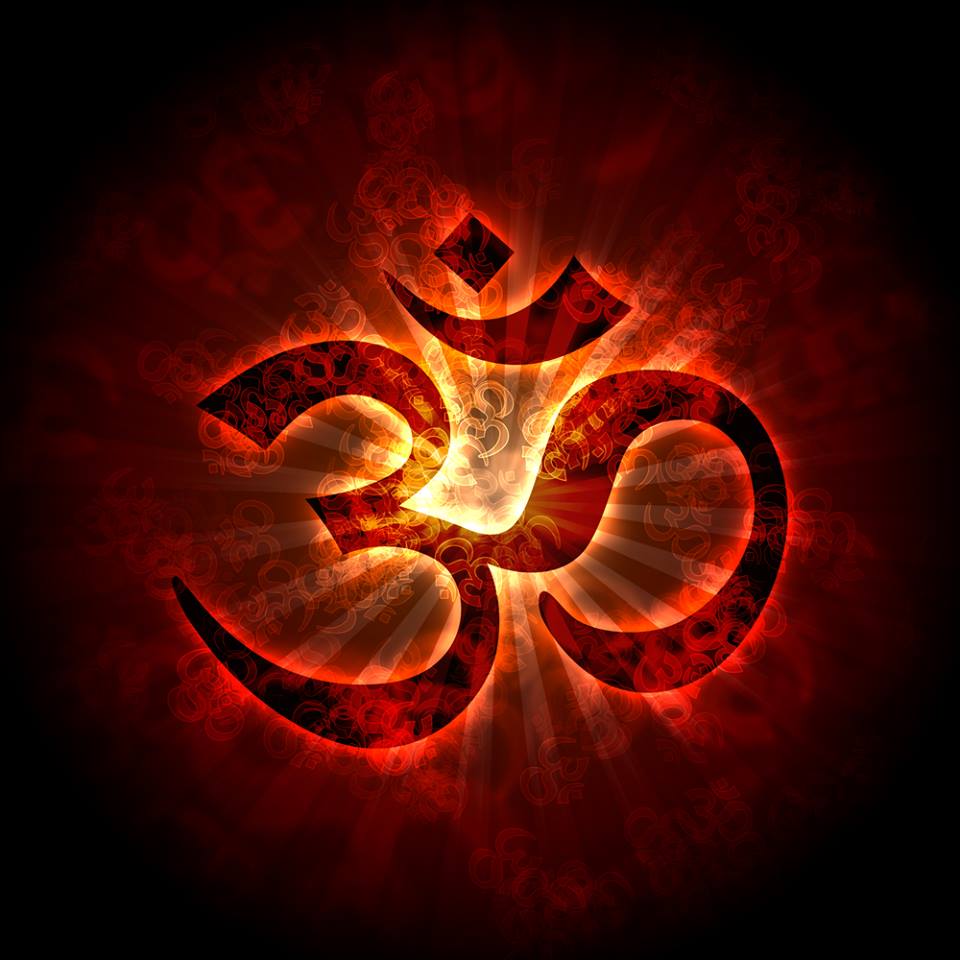 THE POWER OF THE SEED MANTRA OM!

The power of the seed mantra OM is amazing! Have you ever wondered why it feels so good? Where is this power coming from? How much deeper can we connect with the power of OM if we have a more comprehensive understanding of the sound and the symbol? Today we are covering all of these questions and offering a way to go deeper to support our personal practice in a profound way.

DEFINING MANTRAS AND THE BLESSING OF RECEIVING ONE FROM A MASTER

OM is what we call a seed mantra (seed/bija mantra have only a one-syllable sound to them and are very powerful). The mantra OM is so powerful that the Mandukya Upanishad, is entirely devoted to it. OM is a Sanskrit word and much like when you look at a word in the dictionary it can have many meanings. Mantra’s move in this way but from a different premise; mantras are more about the vibrational content than the meaning. They are a living energy. Also, our breath carries prana (life force) so when we speak we are co-creating, we are calling forward our reality and doing so with focused intention is very powerful. What this means is the deeper you go with the mantra the more the energy of it opens up for you because you have developed a deeper relationship with it. This is why when you look up the meaning of a mantra it can vary pretty significantly depending on the master teaching it.  If you are given the blessing of a mantra from a master, they vibrate that mantra at the rate that they are in relationship with it during the time that you receive the blessing. This can propel you years forward in your relationship with the mantra and your meditation. What happens if you don’t have a master to give you the blessing of the practice of a specific mantra? No worries, you are still supported by all who have ever practiced the mantra before you. Yogis have been chanting these for thousands of years. So, when you chant with intention and a heart of gratitude, you can connect with them and draw upon the support of their practices to help you connect and catapult you into the deeper realms of the mantra.

WHAT IS THE MEANING OF OM?

The meaning of OM is simple and I think David Frawley states it brilliantly: “Om is the prime mantra of the Higher self, or Atma. It attunes us with our true nature. It is the sound of the creator, preserver and destroyer of the universe, who is also the inner guru and prime teacher. It reflects both the manifest and un-manifest Brahman, sustaining the vibration of being, life, and consciousness in all worlds and all creatures.” In most religions there is a point of reference to this. In the Christian religion (In the book of John 1st chapter – King James vs.) it states, in the beginning was the Word, and the Word was with God and the Word was God. Now notice that the Word is capitalized as is God. This should give you a clear hint on the importance of the Word. And an interesting aside, this is the standard translation. If you really want to get some amazing a-ha’s and you have read the bible already, give yourself the pleasure of reading the Aramaic Bible in plain English. That translation is “In the origin The Word has been existing and That Word has been existing with God and That Word was himself God”.

According to Paramahansa Yogananda, (Autobiography of a Yogi – author) “Om or Aum of the Vedas became the sacred word Hum of the Tibetans, Amin of the Muslims, and Amen of the Egyptians, Greeks, Romans, Jews, and Christians.” The syllable has been translated into many different languages, cultures, and religious traditions, but the creative and transformative power of the sound remains the same. 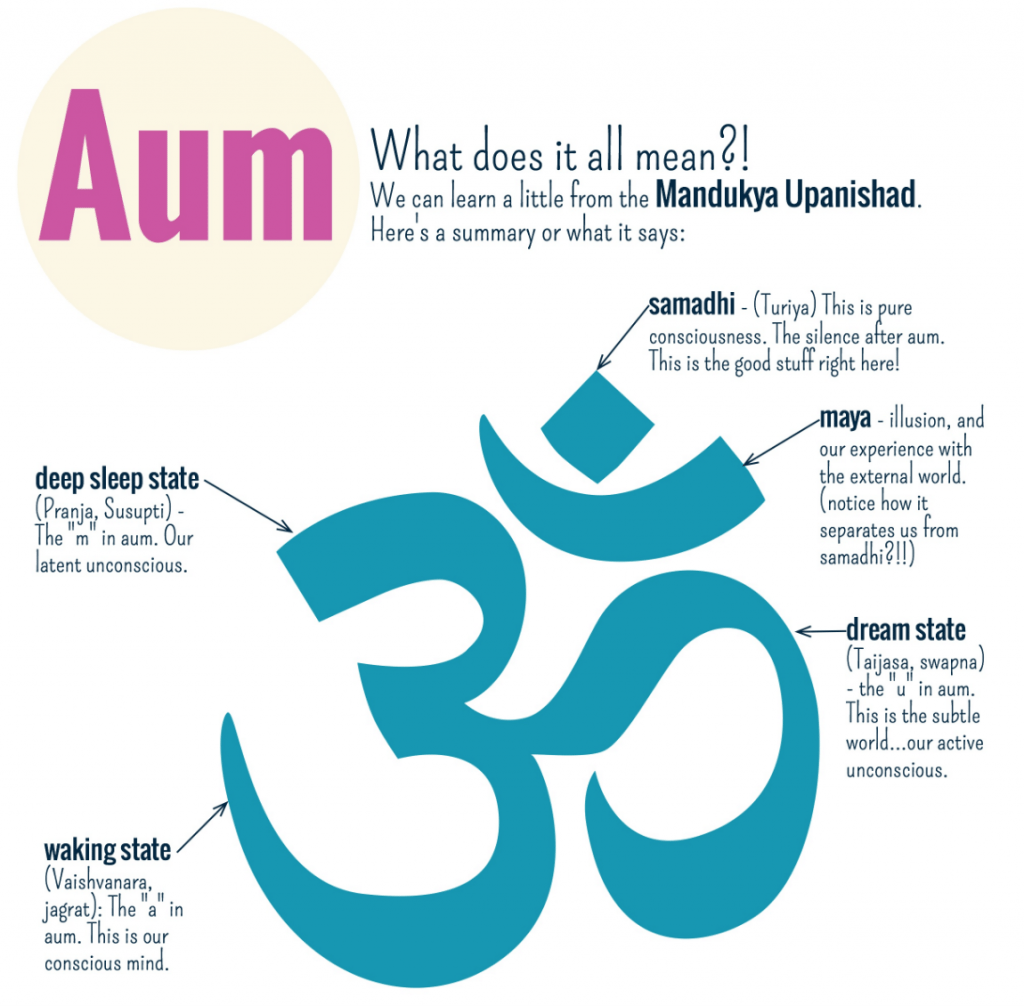 EXPANDING ON THE MEANING OF OM BY EACH SOUND

There are three very distinct sounds in the word OM. They are: Ahh – Ooo – Mmm.

These three sounds also represent the three stages of life: birth, life and death or waking, dreaming and deep/dreamless sleep. The last sound takes us into the deep silence of the Infinite, the void itself that of Infinite Consciousness referred to as Turiya. The chant merges from the ‘M’ into the deep silence within us that connects to this. To pronounce OM correctly, remember, the sound vibration is pronounced “OM” as in home.

In Sanskrit “O” is a blending of two vowel sounds where both are heard in a sort of gliding sound, giving us two different pronunciations. OM and AUM are simply one of transliteration. However, it gives a powerful addition to the meaning of AUM different from OM combining the two into two powerful sides of the same coin. It is said that in chanting AUM you are connecting to the Divine in the three aspects of the Hindu Gods Brahma, Vishnu and Shiva. The first sound, A - invokes Brahma, the creative aspect. The U - invokes Vishnu, the preserver/blessing giver and the M - Shiva, represents the beneficial destructive aspect. So the three sounds in this one syllable connects us into the three major aspects of the Divine, that grace us with existence, sustaining all until it is once again called back into the void.

HOW TO HARNESS THE POWER OF OM

When practicing the mantra OM I have a few recommendations to flow with. I invite you to try as many of these points that you wish to find what feels right for you and your body.

Know the real power of OM is in your relationship in cultivating the vibration of it within you. OM is the sound of the universe. Remember the more that you spend time in meditation and mantra the deeper you go within and with the mantra, expanding and awakening your connection to every part of our amazing universe. It is a beautiful and powerful practice. 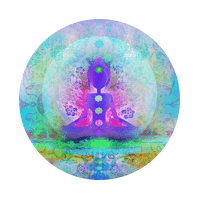 Listen to Brook’s teachings on why we sometimes feel depleted when working or interacting with others and a powerful meditation to make sure you always have more than enough energy to be of the best service possible!